SAN JOSE, CA -- GTC --  Unlocking the full potential of desktop virtualization for enterprises, NVIDIA and VMware today announced that NVIDIA GRID™ technology is available on the VMware Horizon™ DaaS® Platform to deliver 3D graphics on virtualized desktops and applications delivered through the cloud.

DaaS can improve productivity by enabling mobile access and remote collaboration for project teams or contractors in multiple locations by delivering graphics-intensive 3D applications to users anywhere, at any time, on any connected device served. Multi-tenancy is a software architecture that enables a single instance of a software application to serve multiple customers -- increasing agility and lowering costs.

"VMware Horizon DaaS Platform with NVIDIA GRID is a great solution for companies with high-powered computing and visual graphics needs," said Sumit Dhawan, vice president and general manager, Desktop, End-User Computing at VMware. "It enables businesses to drive innovation via instant mobile access and collaboration across users worldwide by delivering exceptional 3D quality graphics applications from the cloud. With VMware and NVIDIA working together, customers and service providers benefit from working with two industry leaders in their respective fields."

Strong Market Benefits
"The benefits of DaaS are extremely compelling and attractive to customers across all industries, and we see tremendous potential in being the first to have a unique DaaS offer that accommodates the needs of customers with high-performance graphics needs," said Sumeet Sabharwal, group vice president and general manager at NaviSite. "We anticipate VMware Horizon DaaS Platform with NVIDIA GRID will be well positioned to capitalize on this opportunity. NaviSite plans to extend its DaaS offering to include NVIDIA GRID technology later this year."

NVIDIA and VMware also revealed a joint development effort to enable VMware customers to use NVIDIA GRID vGPU™ (virtual GPU) technology for GPU sharing with VMware virtual machines. Provisioning up to eight users per GPU, GRID vGPU promises to be the industry's most advanced technology for sharing GPU acceleration between multiple virtual desktops -- without compromising the graphics experience.

GRID vGPU is designed to deliver graphics commands directly to the GPU, allowing the GPU hardware to assign the right amount of memory to meet the requirements of each user. This combined development effort aims to deliver customers and service providers the highest performance for complex, graphics-intensive applications at the lowest possible cost.

Huang's keynote is available on the GTC website at www.gputechconf.com.

To Keep Current on NVIDIA GRID:

About VMware
VMware (NYSE: VMW) is the leader in virtualization and cloud infrastructure solutions that enable businesses to thrive in the Cloud Era. Customers rely on VMware to help them transform the way they build, deliver and consume Information Technology resources in a manner that is evolutionary and based on their specific needs. With 2013 revenues of $5.21 billion, VMware has more than 500,000 customers and 75,000 partners. The company is headquartered in Silicon Valley with offices throughout the world and can be found online at www.vmware.com.

About NVIDIA
NVIDIA (NASDAQ: NVDA) is the AI computing company. Its invention of the GPU in 1999 sparked the growth of the PC gaming market, redefined modern computer graphics and revolutionized parallel computing. More recently, GPU deep learning ignited modern AI — the next era of computing — with the GPU acting as the brain of computers, robots and self-driving cars that can perceive and understand the world. More information at http://nvidianews.nvidia.com/.  © 2020 NVIDIA Corporation. All rights reserved. NVIDIA and the NVIDIA logo are trademarks and/or registered trademarks of NVIDIA Corporation in the U.S. and other countries. Other company and product names may be trademarks of the respective companies with which they are associated. Features, pricing, availability, and specifications are subject to change without notice. 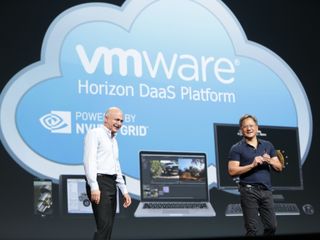