Early adopters of the platform – which combines NVIDIA CUDA-X™ software with NVIDIA-certified GPU servers and devices – include Walmart, BMW, Procter & Gamble, Samsung Electronics and NTT East, as well as the cities of San Francisco and Las Vegas.

“We’ve entered a new era, where billions of always-on IoT sensors will be connected by 5G and processed by AI,” said Jensen Huang, NVIDIA founder and CEO, at a keynote at the start of MWC Los Angeles. “Its foundation requires a new class of highly secure, networked computers operated with ease from far away.

“We’ve created the NVIDIA EGX Edge Supercomputing Platform for this world, where computing moves beyond personal and beyond the cloud to operate at planetary scale,” he said.

The EGX platform features software to support a wide range of applications, including NVIDIA Metropolis, which can be used to build smart cities and intelligent video analytics applications, as well as the just-announced NVIDIA Aerial™ software developer kit. Aerial allows telcos to build completely virtualized 5G radio access networks that are highly programmable, scalable and energy efficient, and can ultimately enable them to offer new services such as smart factories, AR/VR and cloud gaming.

Global Leaders Turn to EGX for AI at the Edge
Walmart is a pioneer user of EGX, deploying it in its Levittown, New York, Intelligent Retail Lab — a unique, fully operating grocery store where it’s exploring the ways AI can further improve in-store shopping experiences.

Using EGX’s advanced AI and edge capabilities, Walmart is able to compute in real time more than 1.6 terabytes of data generated each second and can use AI to automatically alert associates to restock shelves, open up new checkout lanes, retrieve shopping carts and ensure product freshness in meat and produce departments.

“At Walmart, we’re using AI to define the future of retail and re-think how technology can further enhance how we operate our stores,” said Mike Hanrahan, CEO of Walmart Intelligent Retail Lab. “With NVIDIA’s EGX edge computing platform, Walmart’s Intelligent Retail Lab is able to bring real-time AI compute to our store, automate processes and free up our associates to create a better and more convenient shopping experience for our customers.”

Samsung Electronics, in another early EGX deployment, is using AI at the edge for highly complex semiconductor design and manufacturing processes.

“Samsung has been an early adopter of both GPU computing and AI from the beginning,” said Charlie Bae, executive vice president of foundry sales and marketing at Samsung Electronics. “NVIDIA’s EGX platform helps us to extend these manufacturing and design applications smoothly onto our factory floors.”

Other early EGX deployments include:

To accelerate the move to edge computing, NVIDIA has expanded its server-certification program to include a new designation, NGC-Ready for Edge, identifying systems powered by NVIDIA T4, Quadro RTX 8000 and V100 Tensor Core GPUs capable of running the most demanding AI workloads at the edge. Dell Technologies, Hewlett Packard Enterprise, Lenovo, QCT and Supermicro are among the first to work with NVIDIA to certify their systems, now totaling more than 20 validated servers from more than a dozen manufacturers worldwide.

Certain statements in this press release including, but not limited to, statements as to: NVIDIA EGX accelerating AI, IoT, 5G at the edge; the first companies and early adopters deploying the EGX platform and its impact; the performance, impact, benefits and abilities of the NVIDIA EGX Edge Supercomputing Platform, NVIDIA Metropolis and NVIDIA Aerial software developer kit; entering into a new era where billions of always-on IoT sensors will be connected by 5G and processed by AI and its foundation requiring a new class of secure networked computers operated from far away; NVIDIA EGX Edge Supercomputing Platform being created where computing moves beyond personal and beyond the cloud to operate at planetary scale; the early ecosystem partners collaborating with NVIDIA; global leaders turning to EGX for AI at the edge; how users of EGX are deploying the technology, what they are able to do with the technology and its impact; Walmart using AI to define the future of retail and re-thinking how technology can enhance the operation of their stores; NVIDIA EGX Edge Supercomputing Platform enabling Walmart to bring real-time AI compute to their store, automate processes and create a better and more convenient experience for customers; NVIDIA EGX platform helping Samsung to extend manufacturing and design applications smoothly onto their factory floors; the size NVIDIA EGX’s ecosystem; NVIDIA accelerating the move to edge computing by expanding its server-certification program; and the companies that are working with NVIDIA to certify their systems and the number of validated servers are forward-looking statements that are subject to risks and uncertainties that could cause results to be materially different than expectations. Important factors that could cause actual results to differ materially include: global economic conditions; our reliance on third parties to manufacture, assemble, package and test our products; the impact of technological development and competition; development of new products and technologies or enhancements to our existing product and technologies; market acceptance of our products or our partners' products; design, manufacturing or software defects; changes in consumer preferences or demands; changes in industry standards and interfaces; unexpected loss of performance of our products or technologies when integrated into systems; as well as other factors detailed from time to time in the most recent reports NVIDIA files with the Securities and Exchange Commission, or SEC, including, but not limited to, its annual report on Form 10-K and quarterly reports on Form 10-Q. Copies of reports filed with the SEC are posted on the company's website and are available from NVIDIA without charge. These forward-looking statements are not guarantees of future performance and speak only as of the date hereof, and, except as required by law, NVIDIA disclaims any obligation to update these forward-looking statements to reflect future events or circumstances.

© 2019 NVIDIA Corporation. All rights reserved. NVIDIA, the NVIDIA logo, CUDA-X and NVIDIA Aerial are trademarks and/or registered trademarks of NVIDIA Corporation in the U.S. and other countries. Other company and product names may be trademarks of the respective companies with which they are associated. Features, pricing, availability and specifications are subject to change without notice. 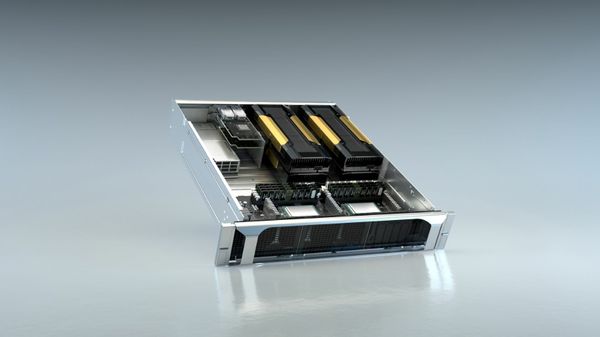