In the latest addition to its GeForce® GTX® family of gaming GPUs, NVIDIA today unveiled the GeForce GTX 1660 SUPER -- the successor to its most successful GPU ever -- as well as the GeForce 1650 SUPER.

Designed to deliver even more horsepower for today’s most popular games, including Fortnite, PUBG and Apex Legends, the pair deliver up to 2X the performance of the prior generation GTX 10-series GPUs and up to 50 percent more performance over the original GTX 16-series. The new GPUs are powered by the Turing architecture and ship with superfast GDDR6 memory.

Along with the new GPUs, NVIDIA is releasing its latest Game Ready Driver, which delivers Day 0 support for hundreds of AAA titles and four new gaming features -- ReShade, NVIDIA Ultra Low Latency, Enhanced Customizable Image Sharpening, and Turing Encoder -- which are described below.

ReShade Filters Come to GeForce Experience
With over 3 million downloads last year, ReShade benefits from a vibrant modding community that creates amazing post-processing shaders for PC gaming. With the latest Game Ready Driver and GeForce Experience update, GeForce gamers can tap into hundreds of ReShade filters and easily apply them in their favorite games using NVIDIA Freestyle or Ansel.

Ultra Low Latency Mode for G-SYNC Displays: Responsive, Smooth, Tear-Free Gaming
The NVIDIA Ultra Low Latency (NULL) mode has been enhanced with support for G-SYNC variable rate technology support, so gamers can enjoy the tear-free visuals provided by G-SYNC, along with the benefit of quick response time that lower latency provides in games.

Enhanced Customizable Image Sharpening For Hundreds of Games
NVIDIA has also integrated an improved image-sharpening filter in the NVIDIA Control Panel for even faster performance and support for all DirectX 9, 11 and 12 games. It has adjustable sharpening sliders and offers a per-game profile, so gamers can custom tailor the level of sharpness for each of their favorite games.

Turing Encoder Built for Gaming and Broadcasting
Designed for gamers who like to stream on platforms like Twitch and Mixer, the new GeForce GTX 1660 SUPER and 1650 SUPER GPUs feature the latest Turing Encoder (NVENC), which enables professional-level image quality and maximum game performance. With support from top streaming applications like Open Broadcaster Software and XSplit, GeForce users can benefit from new and improved NVENC integrations, making it easier than ever to start streaming their gameplay.

The 1660 SUPER and 1650 SUPER GPUs use new GDDR6 memory running at 14 Gbps and 12 Gbps. They are designed to play games at 1440p and 1080p, respectively, and have boost clocks of almost 1.8 GHz, which can be easily overclocked for even more performance.  They also support GeForce Experience™, the NVIDIA gaming application that provides unique, easy-to-use in-game features such as:

About NVIDIA
NVIDIA (NASDAQ: NVDA) is a computer technology company that has pioneered GPU-accelerated computing. It targets the world’s most demanding users — gamers, designers and scientists — with products, services and software that power amazing experiences in virtual reality, artificial intelligence, professional visualization and autonomous cars. More information at http://nvidianews.nvidia.com/.

Certain statements in this press release including, but not limited to, statements as to the performance, benefits, impact and ability of NVIDIA GeForce GTX SUPER Series, ReShade filters, Game Ready Drivers and NULL; the pricing availability of the GTX 1660 SUPER and GTX 1650 SUPER; the benefits of having GeForce Experience and enabling features such as NVIDIA Highlights, NVIDIA Ansel and NVIDIA Freestyle; ReShade creating amazing post-processing shaders for PC gaming; GeForce gamers being able to tap into hundreds of ReShade filters and apply them to their favorite games; and SUPER GPUs featuring the latest Turing Encoder, which enables professional-level image quality, maximum game performance and makes it easier than ever for gamers to start streaming their gameplay are forward-looking statements that are subject to risks and uncertainties that could cause results to be materially different than expectations. Important factors that could cause actual results to differ materially include: global economic conditions; our reliance on third parties to manufacture, assemble, package and test our products; the impact of technological development and competition; development of new products and technologies or enhancements to our existing product and technologies; market acceptance of our products or our partners' products; design, manufacturing or software defects; changes in consumer preferences or demands; changes in industry standards and interfaces; unexpected loss of performance of our products or technologies when integrated into systems; as well as other factors detailed from time to time in the most recent reports NVIDIA files with the Securities and Exchange Commission, or SEC, including, but not limited to, its annual report on Form 10-K and quarterly reports on Form 10-Q. Copies of reports filed with the SEC are posted on the company's website and are available from NVIDIA without charge. These forward-looking statements are not guarantees of future performance and speak only as of the date hereof, and, except as required by law, NVIDIA disclaims any obligation to update these forward-looking statements to reflect future events or circumstances.

© 2019 NVIDIA Corporation. All rights reserved. NVIDIA, the NVIDIA logo, GeForce, GTX, NVIDIA Pascal and NVIDIA Turing are trademarks and/or registered trademarks of NVIDIA Corporation in the U.S. and other countries. Other company and product names may be trademarks of the respective companies with which they are associated. Features, pricing, availability and specifications are subject to change without notice. 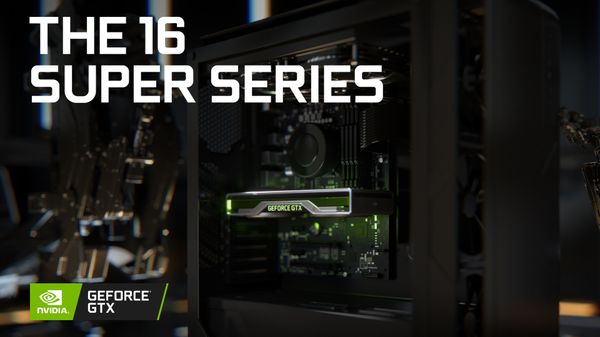