Metropolis makes cities safer and smarter by applying deep learning to video streams for applications such as public safety, traffic management and resource optimization. More than 50 NVIDIA AI city partner companies are already providing products and applications that use deep learning on GPUs, many of which will be on display this week at the GPU Technology Conference.

Video Is World's Largest Data Source
Video is the world's largest generator of data, captured by hundreds of millions of cameras deployed in areas such as government property, public transit, commercial buildings and roadways. By 2020, the cumulative number of cameras is expected to rise to approximately 1 billion.

Humans currently monitor only a fraction of captured video, with most stored on disks for later review. Initial efforts at real-time video analytics techniques have proved far less reliable than human interpretation. Intelligent video analytics solves this challenge by using deep learning in cameras, on-premises video recorders and servers, and in the cloud to monitor video instantaneously with accuracy and scalability.

"With the fast-paced environment of a city, there are a near infinite number of activities taking place," said Dr. Mahesh Saptharishi, chief technology officer at Avigilon. "We're excited by the potential of NVIDIA's Metropolis platform, as Avigilon continues to deliver AI-powered surveillance solutions and video analytics that focus users' attention on what matters most, in order to take action."

"NVIDIA's end-to-end Metropolis platform can be applied to video streams to create smarter and safer applications for a variety of industries -- from transportation to commercial," said Shiliang Pu, president at Hikvision Research Institute. "The benefit of GPU deep learning is that data can be analyzed quickly and accurately to drive deeper insights."

See the AI City at GTC 2017
See how the NVIDIA Metropolis platform is transforming public safety and AI cities at GTC 2017 through May 11 at the San Jose Convention Center.

About NVIDIA
NVIDIA's (: ) invention of the GPU in 1999 sparked the growth of the PC gaming market, redefined modern computer graphics and revolutionized parallel computing. More recently, GPU deep learning ignited modern AI -- the next era of computing -- with the GPU acting as the brain of computers, robots and self-driving cars that can perceive and understand the world. More information at http://nvidianews.nvidia.com/.

Certain statements in this press release including, but not limited to, statements as to: the impact and benefits of NVIDIA Metropolis, deep learning and NVIDIA's AI city partner products and services; GPU Technology Conference offerings; and the expected number of cameras by 2020 are forward-looking statements that are subject to risks and uncertainties that could cause results to be materially different than expectations. Important factors that could cause actual results to differ materially include: global economic conditions; our reliance on third parties to manufacture, assemble, package and test our products; the impact of technological development and competition; development of new products and technologies or enhancements to our existing product and technologies; market acceptance of our products or our partners' products; design, manufacturing or software defects; changes in consumer preferences or demands; changes in industry standards and interfaces; unexpected loss of performance of our products or technologies when integrated into systems; as well as other factors detailed from time to time in the reports NVIDIA files with the Securities and Exchange Commission, or SEC, including its Form 10-K for the fiscal period ended January 29, 2017. Copies of reports filed with the SEC are posted on the company's website and are available from NVIDIA without charge. These forward-looking statements are not guarantees of future performance and speak only as of the date hereof, and, except as required by law, NVIDIA disclaims any obligation to update these forward-looking statements to reflect future events or circumstances.

© 2017 NVIDIA Corporation. All rights reserved. NVIDIA, the NVIDIA logo, Quadro, Tesla, Tegra, NVIDIA Jetson, NVIDIA Metropolis and NVIDIA TensorRT are trademarks and/or registered trademarks of NVIDIA Corporation in the U.S. and other countries. Other company and product names may be trademarks of the respective companies with which they are associated. Features, pricing, availability and specifications are subject to change without notice. 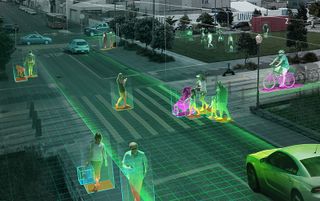